The Clipper Schooner Vigilant and the H.M.S. Bounty: Four Hurricanes

The sinking of the tall ship Bounty last week in the roiling waters of Hurricane Sandy brought to mind the history of our own namesake, the Baltimore Clipper Schooner Vigilant. The Vigilant symbolizes superior American craftsmanship, enduring design and a measure of resilience that’s almost beyond belief.

The Vigilant was built around the turn of the nineteenth century, although the exact launch date is not known. It was a fast sailing vessel with a black oak hull and a shallow draft, the most famous – and most enduring – of the Baltimore Clippers. It was not named Vigilant in the beginning, and it’s not clear what the ship was christened when it launched. There is some evidence that it was the Nonsuch, an American naval schooner which was dropped from the U.S. Naval Register in 1824. The ship may have been sold several times in the Danish West Indies in 1824 before being named Vigilant.

For 130-plus years, she brought mail and passengers to ports in the Danish West Indies and around the Virgin Islands. She was pressed into service by the government of St. Thomas in 1825 to chase the Adolfo, a notorious pirate ship. None of the frigates in the area could sail as fast or get as close to the small islands as Vigilant could. Vigilant was able to pull alongside the Adolfo and surprise the pirates with a musket volley from 30 hidden soldiers, killing the Adolfo’s captain and first mate. After its surrender, many prisoners were found chained in the hold of Adolfo and freed. The pirates were tried and two were imprisoned for piracy.

Vigilant continued in her service to the islands of St. Thomas and St. Croix, making the voyage between Christiansted, her home port, and Charlotte Amalie on St. Thomas in as little as four and a half hours. Sometimes, due to weather or lack of wind, it took more than 60 hours. She was never fitted with a steam engine. Toward the end of her long life, passengers complained that there was no place to put their feet that was not rotten. And still, she floated. Vigilant could have been scrapped many times but owners repaired her instead. Her last captain admitted that the only original part of the ship was an eight-foot section of the oak keel.

In the early 20th century, she was replaced by a steam-powered motor schooner, the Viking, as the main mail carrier between islands. It was a brief respite. The Viking suffered extensive damage at sea in 1912 and was sent back to Europe for repairs. Vigilant resumed her voyages, serving for another 16 years.

Like the HMS Bounty, Vigilant’s final storm was also a hurricane, an unnamed but vicious storm that battered the Caribbean on September 12, 1928. The ship foundered and sank in the waters of Christiansted Harbor. The venerable old schooner had been plying the waters for as many as 138 years, a remarkable fact considering how quickly wood can rot in the warm waters of the islands, and how susceptible it is to worm infestation.

History tells us one more astonishing fact: It was the third time the sturdy sailing ship had sunk in a hurricane.

Fifty-two years earlier, while anchored at Christiansted on September 13, 1876, she sank to the bottom of the harbor in a hurricane. A month later, she was raised and repaired. In October 1916, the often-repaired schooner took another trip to the bottom, again in a hurricane. After the final storm took her down in 1928, the tough old boat was totally wrecked and beyond repair.

Despite two hurricanes and many years of service, Vigilant remained a tribute to superior craftsmanship and flawless design. Her resiliency – call it buoyancy – kept her afloat long after her sister ships went down or were scrapped.

As the Vigilant’s namesake, Vigilant Inc. is proud to carry on in the legacy of the sailing ships of the 19thcentury. With that same dedication to craftsmanship and design, we construct our wood products to last for generations.

Author’s Note: It was sad to see the Bounty with her deck submerged and her masts sticking above the storm waters at odd angles. We have no records of lives lost aboard the Vigilant, save one drowning during the attack on Adolfo. But the Bounty lost her captain, Robin Walbridge, and a crew member, Claudene Christian in Hurricane Sandy. (Christian was a direct descendant of Fletcher Christian, who led the mutiny on the original Bounty in 1789.) We send the crew and their families our heartfelt condolences.

Acknowledgement: For the history of Vigilant, “The incredible story of a 130 year old Baltimore Clipper Schooner,” article by Tage W. Blytmann.
— By Kay Harrison

Vigilant constructed these custom wine cabinets for the new Bali Hai restaurant at the Hanalei Bay Resort in Princeville, Kauai, Hawaii. The former Bali Hai restaurant was destroyed by fire in 2011, and we were contacted by Jim Mehta and Ed Colson of HBR Enterprises in Hanalei, Hawaii to help in restoring the restaurant. 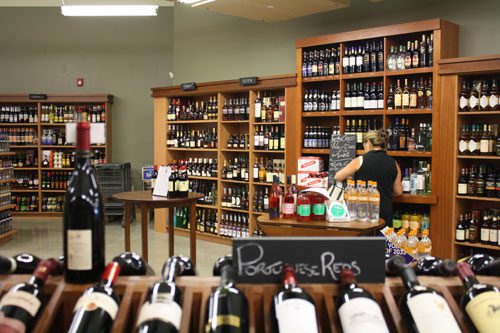