Home / Wine Bottle Closure: Put a Cork in it? Maybe Not!

Wine Bottle Closure: Put a Cork in it? Maybe Not!

Wineries in Spain are forbidden by law to close their bottles with anything but natural cork. Elsewhere, wineries from New Zealand to California are debating the relative merits of plastic corks, natural corks and screw caps. As specialists in long-term wine storage, we at Vigilant Wine Cellars wanted to explore the implications of giving up on cork.

What’s Wrong with a Cork?
For hundreds of years or more, corks have been used to seal wine bottles. It’s a tradition. But it is estimated that from 5 to 7% of stored wines are spoiled because of a type of mold that grows on cork. More specifically, the wine is spoiled by a dank, musty-smelling chemical called TCA that is a by-product of the mold. TCA simply spoils the taste of the wine. This condition is called “cork taint,” and the bottle is considered “corked.”

TCA is an extremely potent chemical, and tiny amounts can ruin a bottle of wine. Some say that 10 billion bottles of wine could be ruined by just one ounce of TCA. As the compound forms, it first takes away the aroma and flavor of the wine, then imparts its own unpleasant properties to the bottle. Experienced wine tasters can detect TCA in concentrations of 1-2 parts per trillion. At 10 parts per trillion, all wine drinkers will notice that the wine smells like a wet dog wearing moldy newspapers. It will taste even worse.

Another potential problem with corks is that they occasionally “fail” and let too much air into the bottle over time. For short-term storage, this is not a disaster, and may even impart a pleasant flavor to the wine. In long term storage, this air in the bottle can create vinegar if there is a certain type of bacteria present. It takes many months of exposure to air before the wine actually tastes like vinegar, but the presence of acetic acid does indicate that the wine is spoiled.

So why do wineries still use cork?

With such a high percentage of spoilage, it would seem that an alternate form of closure is needed. But corking wine is a very old tradition, and that may be what keeps corks in wine bottles. Also in its favor, cork is a renewable and biodegradable material, unlike plastic or metal.

One other factor may be in play: the romance of the cork. Who doesn’t love the pop of the wine cork? The perception has been that fine wines are corked and inexpensive wines use synthetic corks or screw tops. This may be changing.

Plastic Wine Corks
In order to alleviate the problem of cork taint, synthetic cork closures were adopted by some bottlers. The new “plastic” corks are still used by some vintners, but they are not the perfect solution. In fact, they are so sticky, removal from the bottle is difficult and removal from standard corkscrews almost impossible. Wine spoilage is also a problem with plastic corks because they lose elasticity over time, and let in too much air. This causes oxidation of the wine, and often results in formation of acetic acid as described above. In general, the plastic corks decrease the shelf life and may spoil wines that are meant to age longer. The plastic alternative has been a disappointment.

Changing Tradition: Wineries Go to Screw Tops
A 30-month study conducted by Hogue Cellars, a winery in the Columbia Valley region of Washington State, compared synthetic cork, natural cork and a type of screw top called a “Stelvin” cap. Their findings suggest that the screw caps are superior closures to either of the alternatives. Granted, Hogue Cellars is fanatical about the merits of screw caps.

Their research spans nearly ten years and involves two different studies. The latest, conducted from 2004-2010, compared wine closures for three different types of wine and concluded that certain screw caps were as good as or better than natural cork in preserving and aging wine. If these closures are as good as cork, and do not run the risk of cork taint, it seems clear that screw caps should be the preferred method of bottling wine. Read more about their study here.

Hogue Cellars completed the conversion of their entire wine production to a special type of plastic-lined screw cap in 2009. New Zealand wineries are converting to screw caps, and many wineries in Australia have already converted. Some U.S. wineries are joining the movement to screw caps as well. Bonny Doon, a California winery, gave up on cork starting in 2002 and now uses strictly screw cap closures. Benton-Lane winery in Willamette Valley, Oregon, issued this statement as part of “screw cap education” on their website:

“In short, inserting a piece of tree bark into the neck of the bottle is simply no longer the best option available to Benton-Lane, or the wine industry in general, for sealing wines.”

The Future of Wine Closure
The industry as a whole has not been quick to adopt the screw cap, and some winemakers still insist that cork is best for long-term storage because of the aging properties imparted to the wine through the cork. Some adamantly believe that only genuine cork lets wines breathe and age properly inside the bottle.

At Vigilant Wine Cellars, we design and build custom wine storage solutions for wine connoisseurs. Our wine storage products have not changed despite a slow change over to screw capped bottles. This is because screw capped bottles can be stored in any position. The most important factors for long term storage are light and temperature, with humidity also playing a role if the bottle is corked. We believe the change to screw caps will be slow, and in the case of some wineries, may never happen. After all, tradition – and romance – are part of the wine culture, and many wine drinkers are not ready to give up the “pop.”

What kind of lighting should I use in my wine cellar? Lighting is an essential component to any home wine cellar design. After all, you want to be able to view your wine inventory easily. You certainly don’t want a prized bottle languishing in the corner of your cellar past its prime. You’ll also want ...

There are many varying opinions about how to best build a wine rack for your home. First, you need to answer the question, why are you building a wine rack? The answer to this question will lead to others and before long, you will have a plan of attack for your wine rack build. A ... 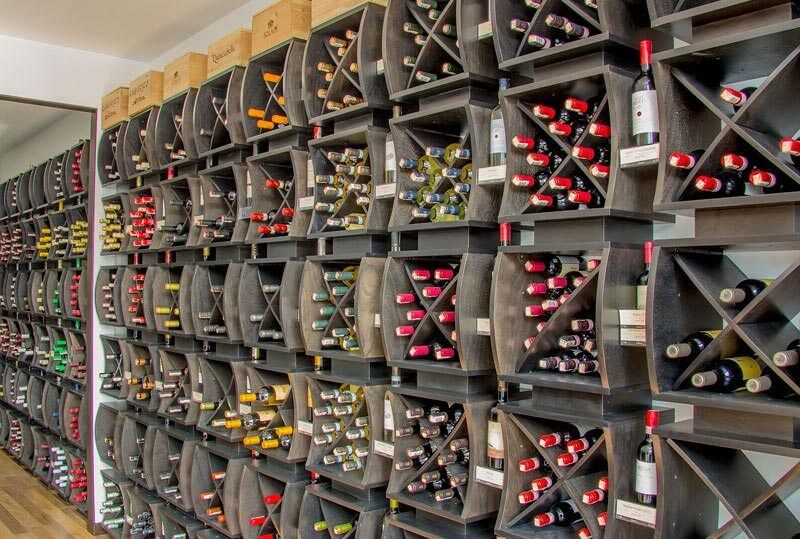